“The beating heart of Rome is not the marble of the senate, it’s the sand of the Colosseum.” — Gracchus, ‘Gladiator’

I used to like football more than I do today.

The modern game feels less like the beautiful game as it becomes increasingly tainted by bigger bucks with sizeable egos to match.

However, living in Newcastle, it’s hard not to be bitten by the bug as St. James’ Park sits proudly upon high, smack bang in the middle of the city — a pounding heart beat whenever there’s a match on.

More than the game itself, I love the rituals that surround it.

…the walk with my children into town becomes denser and denser with fans making the pilgrimage to their cathedral.

A squeeze through the turnstiles, a climb up the stairs and…then…the surge of adrenalin as we step into the huge melting pot, a cauldron of sensations and emotions. 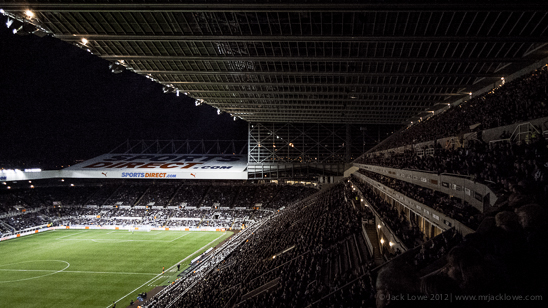 The organic chants and reactions of 50,000 people, a fifth of the city’s population, ebb and flow in tune to a handful of twenty eight* other humans running around on a patch of grass.

I can’t help but think of the all-powerful mob and the sand of the Colosseum, as described in the epic Gladiator.

On Tuesday night we lost 1-2 to Everton.  It’s typical of a recent bad run but, I must confess, my disappointment was only temporary.

Above all, I enjoy being in the midst of my city’s beating heart.

6 thoughts on “My City’s Beating Heart”