I didn’t know Keith Crombie.  I’d been to his famous Jazz Café once, a long time go.

The closed doors of Keith Crombie’s Jazz Café in Pink Lane, Newcastle upon Tyne, on the morning of his funeral…

Over the last year or so, I’ve been keeping tabs on a beautiful documentary my ol’ pal Duncan Davis has been been making about Keith (you might remember Duncan from this post).

Duncan had an acute awareness that making this film should be a priority, not least because Keith was knocking on in years.  Then, on 29th December 2012, Keith passed away at the age of 74.

News soon started to filter through that there was to be a horse-drawn funeral procession through the city.

There seemed to be a gentle buzz of excitement.  Everybody seemed to know about it (apart from the police, it would seem).

A fitting farewell seemed imminent for Keith, to stop Newcastle in its tracks as he slowly passed through with a jazz band and dedicated crowd following behind…

As seen from the top of Grey’s Monument on a snowy day, the horse-drawn coffin, jazz band and crowd makes its way along Grainger Street…

A fitting end for Duncan’s documentary too and I was flattered that he asked me to help film the last sequences of Crombie’s life.

While Duncan worked in and around the crowds, the perfect perching place for me this morning was surely atop the 130ft Grey’s Monument, smack bang in the city centre.

So, with the necessary permissions gained, I was allowed to climb the 162 spiral steps to capture a unique perspective on the procession.

The procession is over and the snow descends on Newcastle…

The views were extraordinary, of course, and the weather was icy.  The memories of seeing Keith’s horse-drawn coffin pass slowly through town to the tune of the accompanying jazz band, along with hundreds of folk, will stay with me for a long time.

I can’t wait to see the final film, which is being cut by Duncan as I write — I hope to be able to share it with you here some day soon… 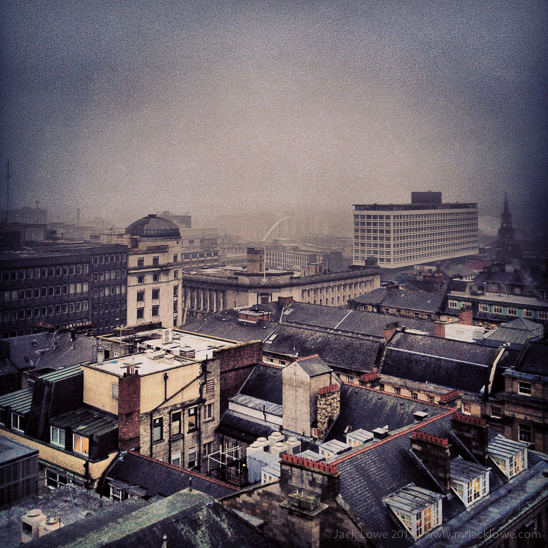